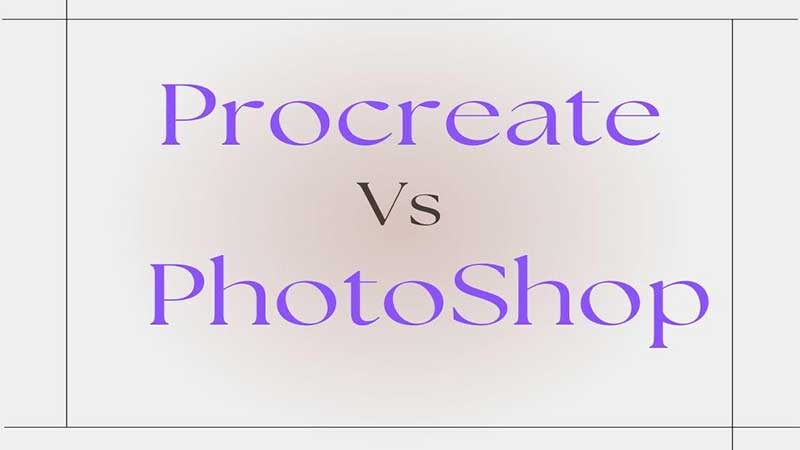 Graphical and digital designers require influential designing software’s to produce their art. Fortunately, there is a lot of tools and various designing programs which help you in creating some remarkable designs. It can sometimes be hard to pick the right platform, with so many good software options for designers. Plus, the pricing of some software alerts the designer to commit to the one option which works best for them and is worth the price. This article is about the two main photo editing software’s Adobe Photoshop and Procreate. We shall be comparing these two to help our readers understand the vital differences between them as for digital illustrating, it is important for the user to know the product personally by knowing the pros and cons of it.

Comparison at a Quick Glance:

Adobe Photoshop was created in 1987; hence it is a much older application that has been upgraded multiple times to become the ultimate powerhouse that it is today. It is now the main product for many creative industries which specialize in photo editing and producing some medical content. It seamlessly integrates with other Adobe apps. Adobe had Approximately 12 million cloud subscribers as of the year 2017.

Procreate was created in 2011, is a relatively new competitor in the world of photo editing. It was mainly designed to fully utilize the artistic capabilities of the iPad and Apple pencil. This app aims to refabricate the essence of natural drawing by using some digital features.

Adobe offers the maximum features making it a more versatile app as compared to Procreate. It allows you to manipulate the colors of an image, cropping it, repairing flaws (such as red eyes), and much more.

With respect to features, the focus of Procreate was illustrating drawings on the iPad. The users can try various blend modes, clipping masks, play around with recolor methods, and use quick line and quick shape

When we talk about ease of use, procreate takes the edge. It gives a simple and friendly menu which enables users to easily create a drawing. Hence, we can say procreate is easy for beginners to use.

Adobe Photoshop also allows users to do the same things as in procreate but the learning process is a bit hard in comparison to procreate. You can easily take online procreate courses to learn and develop new skills.

Adobe Photoshop gives its users maximum control over picture editing. Users have the full authority to manipulate and edit images as per their own choices.

While Procreate only has the basic tools to serve the purpose and does not give much control to users over editing of images.

It is one of the most famous image editing software which can be used for almost anything and everything. From web & graphic designing to typography and image editing, Adobe Photoshop is an ideal option.

Procreate is designed exclusively to be used with iPad and Apple Pencil, which gives artists the freedom to work digitally. It also makes designing on the iPad more natural and instinctive. It is packed with a bunch of creative tools and has a simple learning curve.

Adobe Photoshop is professional, high-quality software that is popular in the market for graphical programming and picture editing. At first, it was a one-time payment software for $800, but now it has changed into a subscription plan. Now the subscription starts at $10 per month for Adobe Creative Cloud Photography Plan. If the users wish to use the whole of Adobe applications, they need to pay an extra amount

The cost of Procreate in the App store is $9.99 and is available in 13 various languages.

Procreate and Adobe Photoshop both are pixel-based graphics and image editors which can be used for digital work.

Adobe Photoshop as a Tool.

Procreate as a Tool:

Procreate an iPad-exclusive app that enables users to sketch, paint and edit with the help of a diverse range of tools.

It is available only on Apple IOS and iPad OS.

Is It Worth Using Cloud Solutions? What is Their Potential?

Know All About Silver Commodity Trading in India