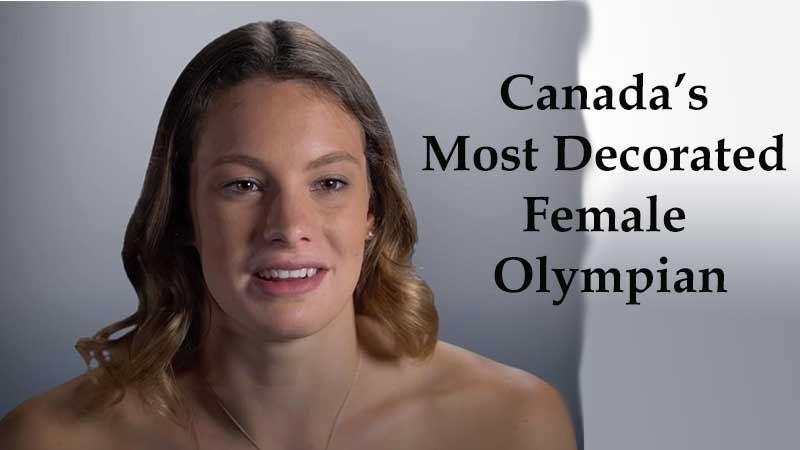 With three medals earned in Tokyo and this year’s Summer Olympic Games to go with the four medals she won at the 2016 Rio Summer Games, swimmer Penny Oleksiak has become Canada’s most decorated Olympian of all time. Not a bad list of accomplishments for someone who only celebrated her 21st birthday on June 13. Oleksiak was still a high school student when she set a Canadian single Summer Olympics record for medals won while in Rio.

When she was nine years old, unable to complete a full lap of the pool, Penny Oleksiak was cut by every swim team she tried out for in her hometown of Toronto. Today, she is a cut above every athlete who has ever represented Canada at the Olympic Games.

While still a teenager and barely old enough to drive a car, Oleksiak went to the Rio de Janeiro Summer Games and won four medals in the Olympic competition. That was a record for a Canadian at one Olympiad. Five years later this summer in Tokyo, Oleksiak added another three medals to her totals. Her seven medals make her Canada’s most decorated Olympic athlete. Betting sites such as sportsbetting.ag offer wagering on the Olympic Games.

You can also read: The Million Dollar Mystery- Which Sports to Choose for Betting?

In Rio, Oleksiak won gold in the 100-meter freestyle, a silver in the 100m butterfly, and a pair of bronze medals in the women’s freestyle relays (4 × 100m and 4 × 200m). At 16, she was the youngest Canadian athlete to win an Olympic medal. Along with relay teammate Taylor Ruck, they became the first Olympic medallists born in the 21st century. Oleksiak was voted Canada’s athlete of the year and female athlete of the year in 2016.

Coming into Tokyo, expectations were not immense that Oleksiak would come anywhere near her Rio performance. Injuries hampered her prep for the Summer Games. ​​“I had, like, a pretty bad back injury, like a herniated disc and arthritis and like a pinched nerve in my lower back, so there was a long period where, like, I couldn’t really train at all,” Oleksiak told Global News.

Hughes was the first and remains the only Olympic athlete to win multiple medals at both the Summer and Winter Games. At the 1996 Atlanta Summer Games, Hughes won bronze medals in cycling in the road race and time trials.

Originally a speedskater as a youngster, Hughes returned to her first sporting passion in 2000. At the 2002 Salt Lake City Winter Olympics, Hughes won a bronze medal in the 5,000 meters. Four years later at the Turin Winter Games, Hughes won gold in the 5,000m and silver in the team pursuit. Her sixth Olympic medal was won in 2010 in Vancouver. Hughes earned a bronze in the 5,000.

In 2010, Hughes was inducted into the Canada Sports Hall of Fame and was awarded a star along the Canadian Walk of Fame.

After failing to make the Canadian women’s Olympic hockey team in 1998, Klassen turned to speedskating as her sport of choice. At Salt Lake City in 2002, Klassen won her first Olympic medal, a bronze in the 3,000m. Four years later at the 2006 Turin Winter Games, Klassen established a Canadian Olympic record medal haul and tied the Olympic speedskating record for medals won in a single Olympic Games. She won five medals, tying the mark American speedskater Eric Heiden set at the 1980 Lake Placid Winter Games.

Klassen set 15 world records during her career. In 2006, she won the Lou Marsh Trophy as Canada’s athlete of the year.

Buying Wine Online: A Convenient Way for Any Wine Aficionado

What are the Benefits of Unlimited Data Mobile Plans