Know All About the Fastest Motorcycle in The World 2021 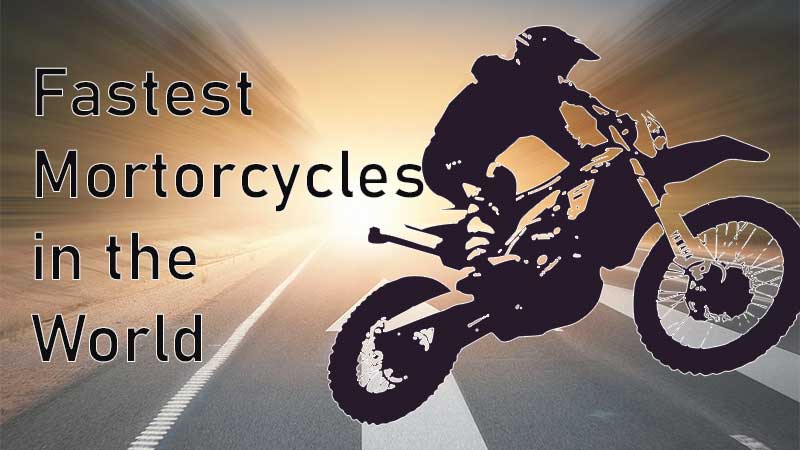 What today’s advanced generation wants in a bike, is speed and good looks, both of these comes at the cost of comfort. Most of the youngsters want to own and ride a sportbike rather than a roadster. All fastest motorcycles in the world 2021 fall under the category of sports bikes. These are the motorcycles that are designed for more speed and acceleration typically used for the purpose of racing. How good a sports bike is, this decision is made on the basis of its speed, breaking potential, cornering ability, maximum acceleration and ease of handling by the rider.

Here in this article, we are going to see some of the characteristics of the speed racing bike and top ten sports bikes, what are their features and where they are lagging behind.

How are Sports Bikes Designed?

Sports bikes are designed so as to maximise the speed, by reducing the effect of the force applied by the air, which resists the motion of the bike and thus results in reduced speed.

When normal bikes are designed, the comfort of the rider is of utmost priority. The rider sits upright on these bikes due to which his body is fully exposed to the opposite force of the air which tends to reduce the speed and therefore, these are designed to provide comfort to the rider, rather than more speed.

While designing the top speed bikes, the sitting comfort of the rider is not much of a concern for the designers, rather the balancing of the bike, speed and acceleration, always remain the primary concern. In order to achieve so, the footpegs are a little higher than the normal position and are more placed towards the rear end, which brings the legs closer to the body and the elbows remain bent while handling the hand bards of the bike, due to which the biker is bent over the tank and head remains close to the front part of the bike.

Due to such sitting position of the biker, less body is exposed to air and thus the drag by the force of air is reduced and thus more speed is achieved.

The same scheme of body design is followed by the fastest bike in the world.

Other than the optimized body design, there are several other features that make a sports bike different from the bikes that we come across daily. Following are some of the prominent features, and of course, the list does not end here:

Top 10 Sports Bike in the World

So far we have gone through some of the specifications and features of a sports bike and thus, now we are ready to see the configuration of the fastest bike in the world and other bikes as well, that are able to make it to the top ten of our list of fastest sports bikes.

Kawasaki Ninja H2R, track-only variant tops our list. This bike falls under the “supercharged supersport” category and is produced by Kawasaki Heavy Industries. The bike is known to produce 310 horsepower, which is 50% more than the street-legal sports bike. Kawasaki Ninja also has its street-legal variant which produces 200 horsepower.

The production of the bike started in 2015 and since then it has broken many records of attaining maximum speed in its category of sports bike. The top speed of the Kawasaki Ninja H2R ranges from 331-400 Km/hr. The steel trellis framework provides the bike with a rigid structure and protects its internal components from any outside damage. Moreover, the fairing of the whole body of the bike is done with carbon fibre which is light in weight, more stiff and durable in comparison to the other materials like steel and aluminium that were used earlier. The list of features of this world no 1 bike does not end here and we cannot list them all, but we try to cover most of its important specifications in the below table:

Dodge Tomahawk stands second in the list of the best bikes in the world. This bike was launched by Dodge in the year 2003 but it was not street-legal due to which very few numbers of it were sold. This bike remains in the headlines due to its very unique design and estimated speed which ranges between 480 km/hr to 680 km/hr. It is not the actual speed that this bike has gained, but it is calculated through its 500 horsepower and evaluated that the bike can attain that much speed. The Tomahawk has independent suspension on all four wheels, which provides the rider additional support and balance by countersteering and leaning on a turn.

Some of the features of the bike are as follows:

Lightning LS-218 stands third in the top 10 bikes in the world. This bike is the fastest street-legal motorcycle produced by Lightning Motorcycle. One very astonishing feature of this bike is that it is charged electrically, and has been holding the title of the world’s fastest street-legal motorcycle since 2014 with a top speed of 351 km/hr (218 mph). The bike has an Interior Permanent Magnet (IPM)  liquid-cooled motor of 150 kW. The Lightning Motorcycle also claims that the bike produces 203 PS power and 228 Nm torque. The high speed of the bike is due to the immense and instance availability of torque. The bike also has totally adaptable spring preload, rebound damping and compression.

Suzuki Hayabusa is famous for its abundant durability, flexibility and enhanced appearance. Ideal for setting new standards for ultimate performance and claiming number one in the class it has created over the past two decades, Suzuki Hayabusa made its way to the top 10 bikes in the world.  The bike’s 1340 cc four inline, liquid-cooled engine adds more to its performance. Fulfilling all the BS6 standards, the bike has achieved yet another level of coherence and durability. Plenty of power and torque ensure more confidence driving at any speed. The frame and the drive gear ensure smooth handling because of which the driver is able to maintain full control. The whole body structure of Hayabusa is designed in a way so that it can maximally reduce the effect of aerodynamic drag and provides maximum speed. The top that Hayabusa is known to reach lays between 299-303 Km/hr.

Following are some of the specifications of this bike:

Kawasaki Ninja ZX-14 is yet another bike that has made its way to the list of 10 fastest bikes in the world, produced by Kawasaki Heavy Industries. This bike is able to reach an acceleration that ranges between 0-60 mph within 2.5 seconds. This bike has an immensely powerful engine of 1,441 cc with four inline cylinders, newfangled electronics, innovative and staggering structural body frame that provides rigidity and steadiness to the whole composition. The unbeatable performance of the bike is due to the Kawasaki Traction Control (KTRC) and Digital Fuel Injection (DFI) which are very advanced electronic systems.

Moreover, the handling of the Kawasaki Ninja ZX-14 is made easy due to the lightweight aluminium body which is tested against the aerodynamic drag and wind-tunnel test.

Some other specifications of this speed racing bike are listed below:

BMS S1000RR is another superclass sports bike that is known for its sleek look and high speeds attaining capacities. Always on the edge and looking for the ideal line, RR comes with 152 kW (207 hp). Uncontrolled power drives the RR to supremacy, with a maximum torque of 113 Nm at 11,000 rpm and a torque curve of at least 100 nm in the range of 5,500 to 14,500 rpm. Since the first generation of the bike has been released, RR has gone through a phase of evaluation that resulted in better performance with a lighter body frame.

Following are some of the specifications of this bike:

Brutale has reaffirmed himself as the king of super structured bikes. From the first model until today, its leadership has focused on design, engine performance and driving experience. Today the new Brutale 1000 RR returns to the top due to the indomitable build quality of all the components, the advanced engine with 998 cc engine displacement and the advanced electronics. This is one of the fastest motorcycles in the world 2021 due to its high speed procuring capacity that is above 300 km/hr/.

Listed below are some specifications of the Brutale 1000 RR:

The Honda CBR1000RR-R Fireblade is the company’s flagship in the litre-class category. Honda offers two variants of the motorcycle – CBR1000RR-R Fireblade and CBR1000RR-R Fireblade SP. Both versions of the CBR Fireblade are powered by a four-cylinder, DOHC, 999 cm, liquid-cooled engine with 16 valves. The engine is ready to produce 215 hp at 14,500 rpm. and maximum torque of 113 Nm at 12,500 rpm. The equipment list includes dual LED headlights, multiple air vents, aerodynamic wings, a 5-inch full-colour TFT display and a sharp tail section.

Following are some other features of the Honda CBR Fireblade:

The Yahama YZF-R1 Superbike is powered by a 998 cc four-cylinder engine. The powerful crossplane engine produces a maximum power of 197.3 HP at 13500 rpm and a maximum torque of 112.4 Nm at 1150 rpm. The transmission can be done through 6-speed with the help of a multi-plate wet clutch. Also, the weight of the bike and the cylinder vibrations are reduced to their minimum by the use of titanium con rods. The delta box frame is made up of aluminium that provides extra stability while leaning into the corner.

Below listed are some of its specifications:

The Aprilia RSV4 boosts aerodynamic performance with built-in aerodynamic wings and a dual-layer fairing that brings its quality and efficiency to the top-notch.

Then there is the Inverted Swingarm from Racing World and a new electronic system with improved APRC, not to miss out on the powerful engine that churns out 217 hp, increased torque and of course, the distinctive Aprilia frame of the body is unbeatable.

In rigorous reference tests around the world, the RSV4 has proven its strength by surpassing the status quo as a true conqueror. Due to these reasons, Aprilia RSV4 is included in the top speed bikes of the world.

Below is the table of some of the specifications of this superbike:

What to Do When Your Article is Rejected Due to Plagiarism?

Does Your Business Need an App?

How to Find the Best Traffic Infringement, Lawyer?